With thousands of retailers insisting that customers pay only with credit cards rather than accepting personal checks, how could financial services leader Deluxe Corporation kick-start a conversation that would encourage consumers to challenge limits on their ability to pay with a check vs. credit card?

The answer: A campaign created by Maccabee, “Stand Up For Your Right to Write Checks.”

Adopting a tongue-in-cheek style, the “Stand Up” campaign kicked off with a Deluxe Corporation survey that found three-quarters of consumers declaring they believed they should have the freedom to pay at stores or restaurants with whatever method of payment they prefer: credit card, cash or check.

Partnering with CollegeHumor.com, Maccabee created online videos featuring the imaginary character, “Duncan Steele: The Man With Checks Appeal,” who demonstrated on YouTube just how alluring writing a check can be. Maccabee offered news media a downloadable white paper on the survey data and a syndicated “New Ways To Save Money” camera-ready column.

Sparking a Digital Conversation with Consumers

The result? A lively national conversation about checks that engaged millions in a new debate over payment options, sparked by no fewer than 1,000 stories generated in just 21 days, including mentions on CNN Radio and National Public Radio’s Marketplace, 350,000 impressions through websites from CNNMoney.com to PayMyBills.com, 158 broadcasts through regional TV partners, mentions on blogs such as BrassMagazine, CheckAdvantage and Wisebread, and trade/business media coverage including PaymentNews.com and American Banker magazine, whose headline included the words, “Checks are Sexy and Cards Are for ‘Suckers.'”

Not only did the “Stand Up For Your Right” campaign inspire online and offline engagement about the topic, Deluxe noticed an uptick in check sales and new sales leads from its bank partners. Time Magazine’s Moneyland blog had the last word about Deluxe Corporation’s PR campaign: “Do you have Checks Appeal? Duncan Steele does. And he’s fighting for your right to pay in stores with an old-fashioned paper check. [He] is the star of an advocacy campaign aimed at protecting the rights of consumers who, for some reason or another, still want the option of writing checks – you gotta like this Duncan Steele guy. Enjoy.” 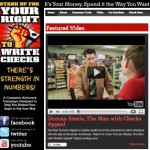 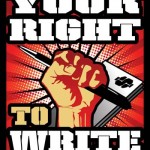 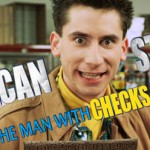