"Maccabee provides AMS with a solid and effective PR/media platform. Strategic leadership and public relations guidance accompanied by unbridled enthusiasm and professionalism are all competencies this 'hidden gem of an agency' owns. Small and sassy, Maccabee has the knowledge, expertise and tenacity to meet PR challenges."
- Timothy Ziaja,
former Director of Global Communications, American Medical Systems

American Medical Systems (AMS), the leading developer of medical devices that restore male and female pelvic health, had come to a crossroads.

For the first time, the $350 million company wanted to speak directly to patients — not just to urologists — about surgical remedies for erectile dysfunction (ED). But first, AMS had to overcome the stigma that prevented men from talking with their wives and physicians about sexual dysfunction.

Lead spokesperson for the campaign: famed sex therapist Dr. Ruth Westheimer, who had just published a book “Dr. Ruth’s Sex After 50.” The objective: combine media relations, events, interactive marketing, bookstore signings, direct mail and advertising to encourage patients suffering from ED to make appointments with their urologists. Working with physicians in Phoenix, Miami, Houston, Cleveland, Nashville and Birmingham, Maccabee and a coalition of agencies launched the campaign by driving potential patients to a website, www.Edcure.org. At the site, patients would learn if they qualified to attend an event, “Dr. Ruth’s Evening for Two.” Maccabee unveiled sexual health surveys customized for each market, revealing male and female attitudes toward ED.

Campaign results were electrifying – 19 TV segments broadcast over nine TV stations; 4.7 million consumer impressions in print media from the Arizona Republic to the Houston Chronicle and the Miami Herald; and more than 100 minutes of radio time on 14 stations. Public TV’s “InnerVIEWS” taped a segment with Dr. Ruth for distribution to 70 public TV stations nationwide.

Best of all, patients jammed the “Evening for Two” events and many spoke to their urologists. American Medical Systems reported that fourth-quarter revenues the year of the campaign were up by 58% to $115 million, compared to the previous year. But Maccabee didn’t stop there – the agency then placed a story in Men’s Health and three consecutive feature stories in The Wall Street Journal! 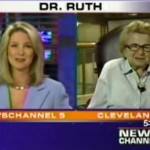 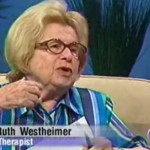 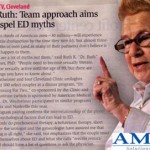 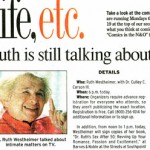